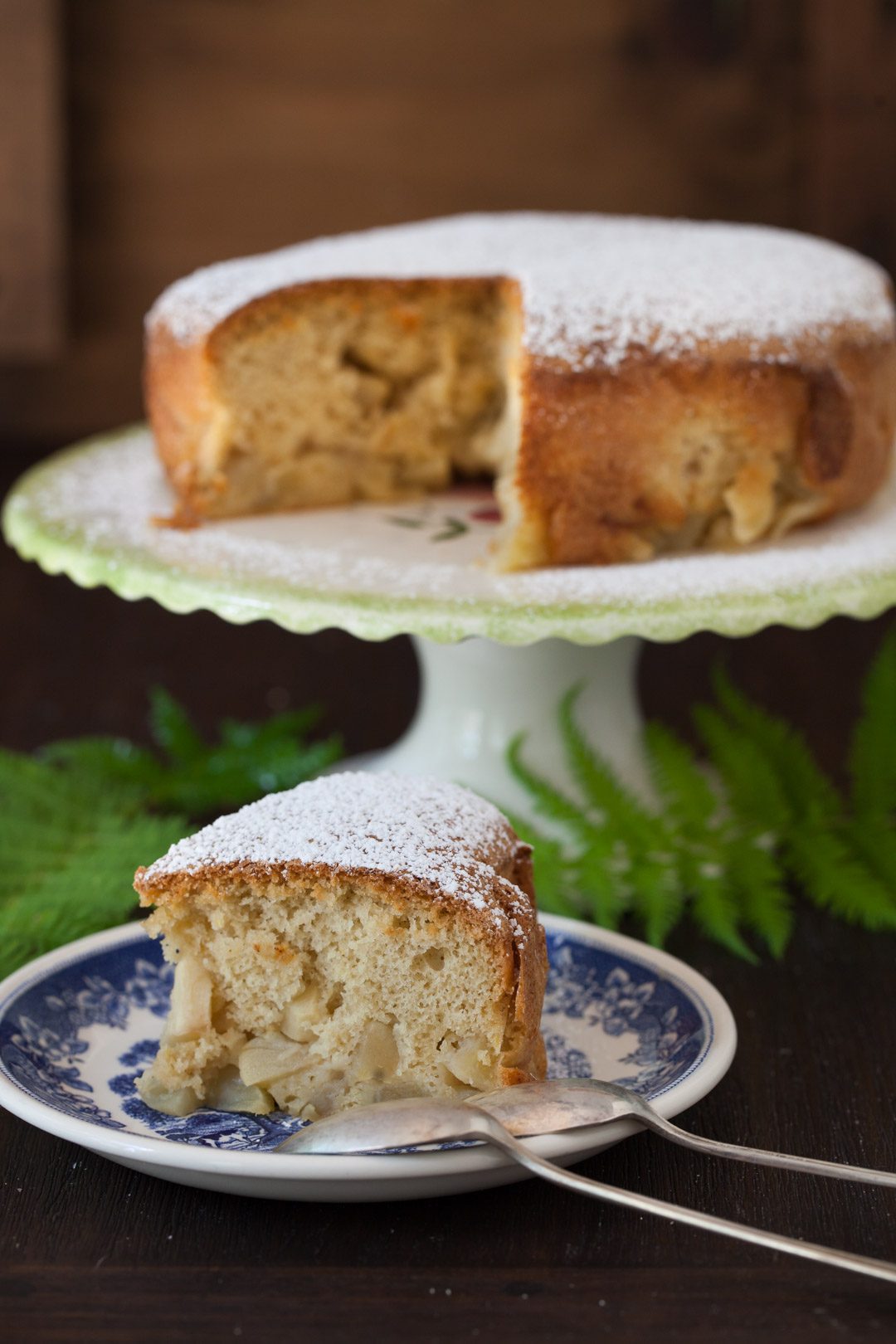 Dear readers, today in “Russian Monday” I would like to introduce popular dessert dish named “Charlotte”, or in Russian pronunciation “Sharlotka” – apple cake. The recipe is very simple and cake can be served either warm or cold. I must warn you in advance – it is very hard to limit yourself to only one piece, you may not notice how fast the whole cake might be gone.

If you expect guests, this dessert can be made very quickly and I can assure you – everyone will enjoy it! 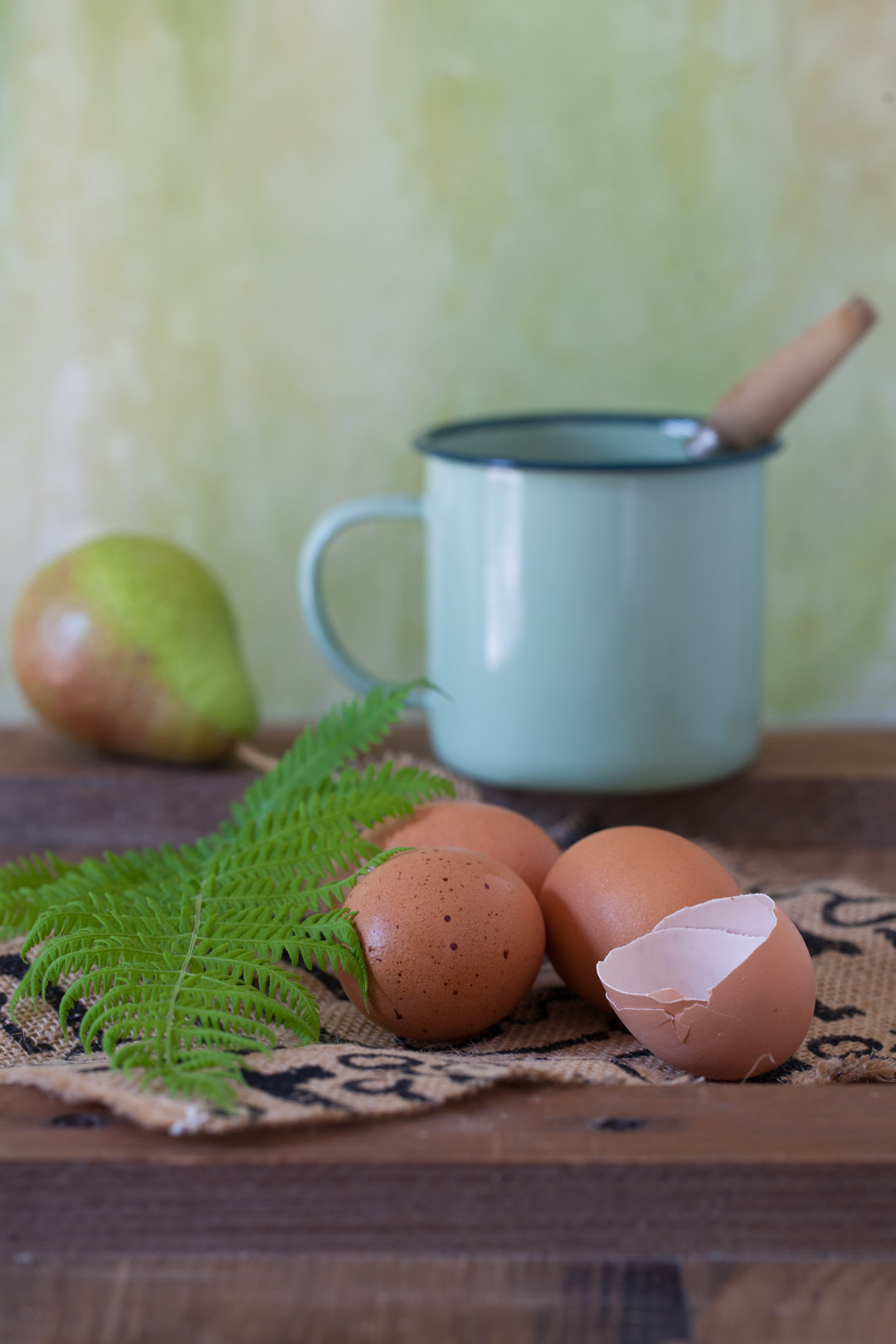 The idea of classic “sharlotka” has been borrowed from English cuisine. It used to be one of the variations of warm pudding. Soft bread soaked in milk and egg yolks is spread around the bottom of baking pan and then covered by a layer of cooked apples (mashed or sliced and boiled with sugar). Another layer of soft milk-soaked bread goes on top. The number of such layers can vary – as much as your pan allows. Sharlotka is baked in the oven and served warm with ice cream, wiped cream or sweet sauces.

Most popular sharlotka stuffing is made of apples due to their accessibility and cheap price practically anywhere in Europe. Apple sharlotka is customary on harvest season table in fall. However, instead of apples, other fruits can be used for staffing – pears, plums, and various berries. And yet another option is to replace fruit staffing with chocolate mousse.

Russian sharlotka has been baked for the first time in London in the early 19th century by French chef Marie-Antoine Carême who served Russian tsar Alexander I. Initial name of the dish was “Charlotte à la Parisienne” (Parisian Charlotte), however it has become known under the name “Charlotte Russe” (Russian Charlotte). The base of the pie was made of the Savoiardi cookies or sponge cake and Bavarian cream was used for staffing. Russian Charlotte was served cold. During fairly recent times Sharlotka has transformed into an apple cake – very popular and easy to cook dessert. Sponge cake layered with thinly cut cooked apples is the most common form of the pie.

There are few versions of the dish name origin. One version suggests that initial recipe has been developed by Queen Charlotte, wife of British monarch Georg III; another version suggests the name of the pie stems from the old English word “charlyt”, i.e. made of custard. Also, in 15th century England similarly named meat dish had been quite popular as well. And, finally, the most romantic and my favorite story tells about a chef who has invented this pie in order to gain an attention of lady Charlotte who he has fallen in love with. 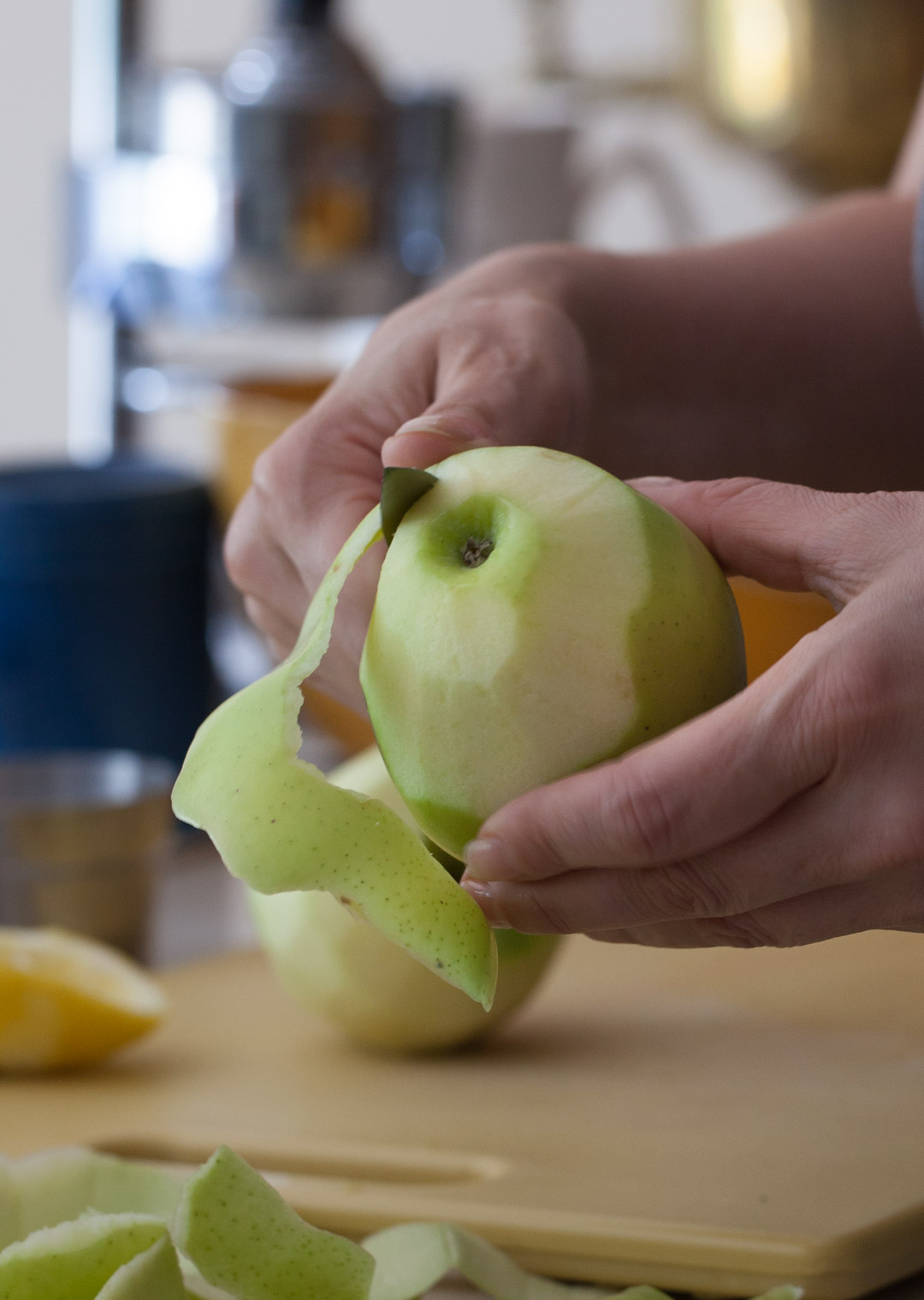 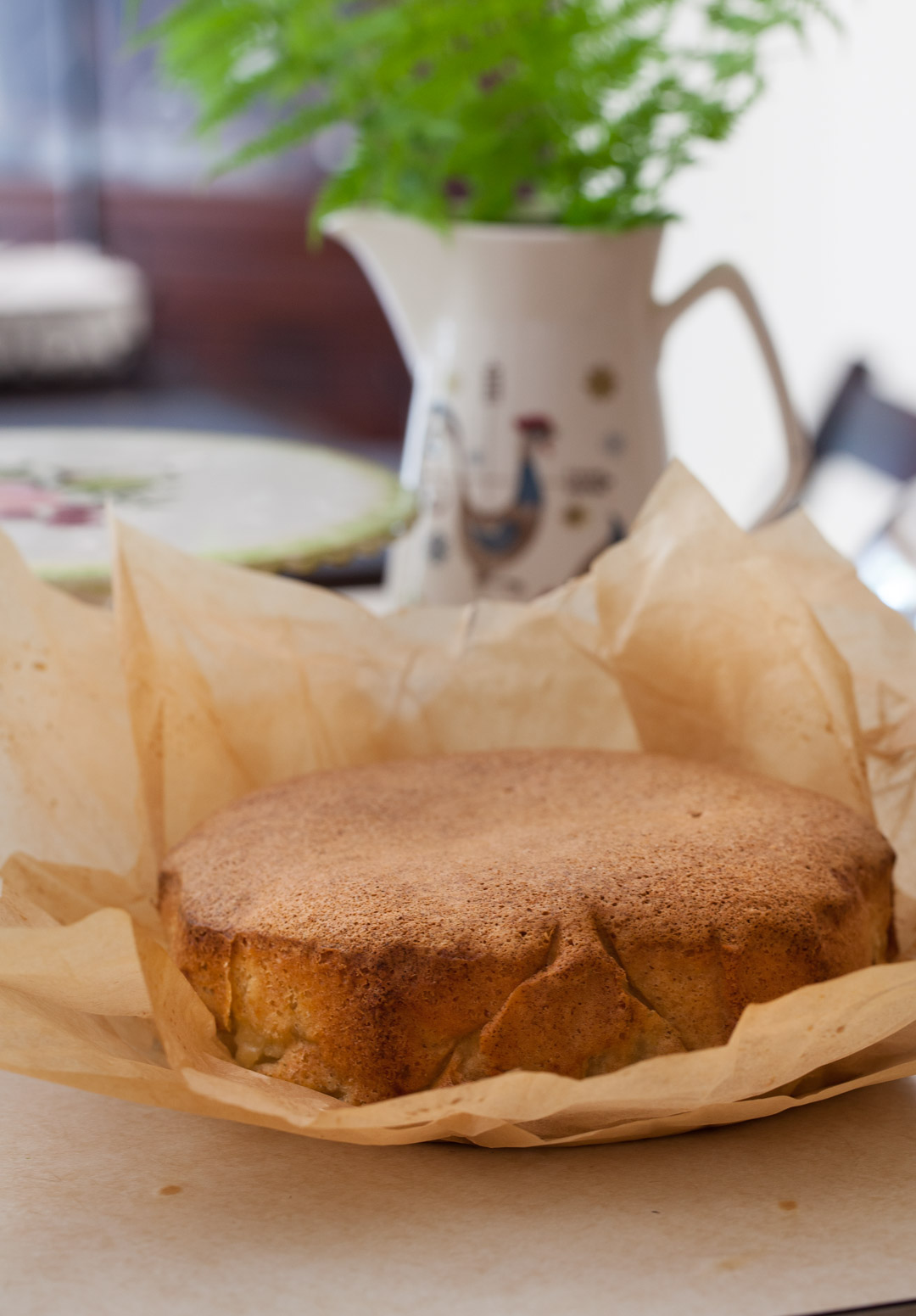 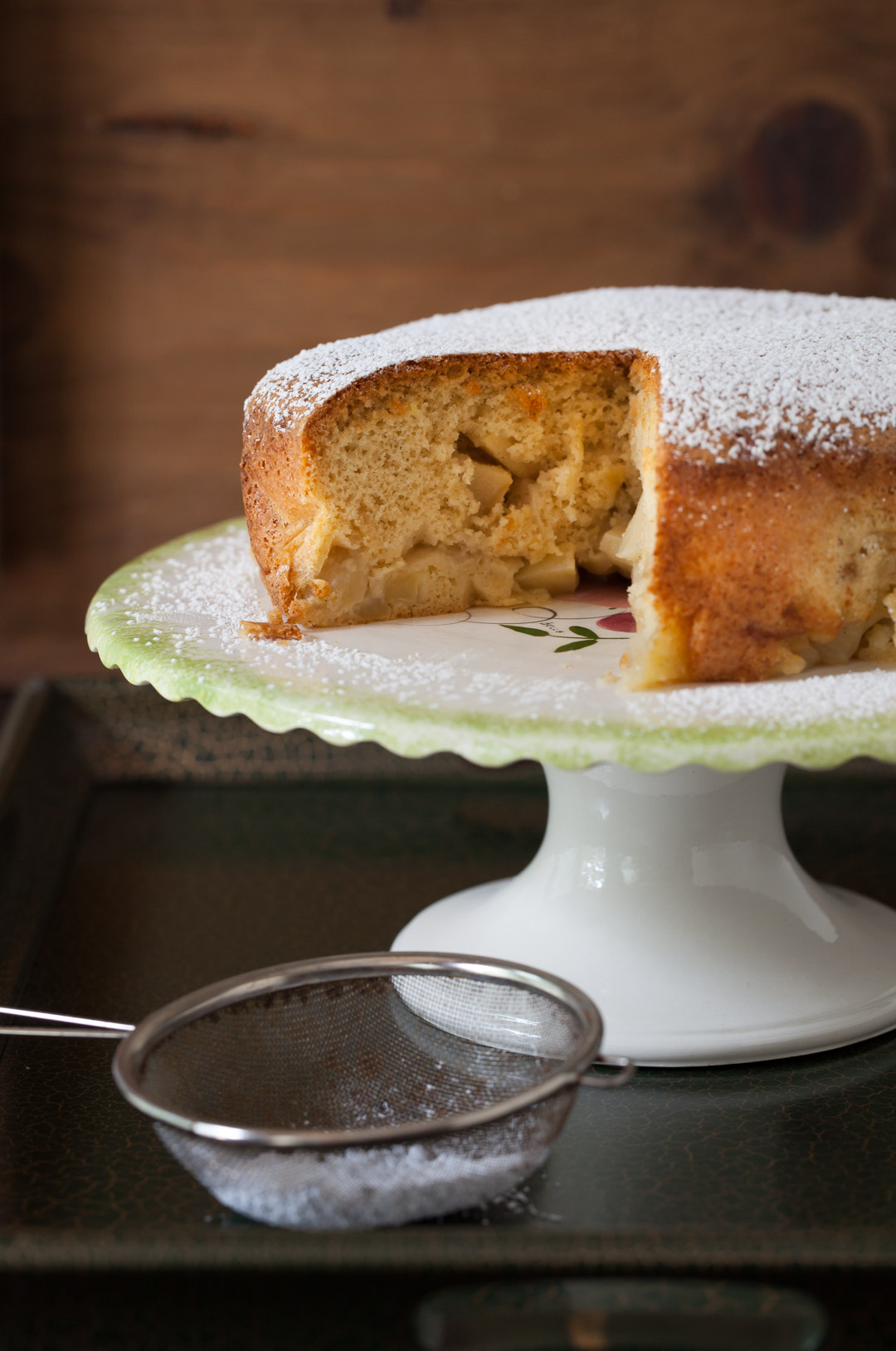 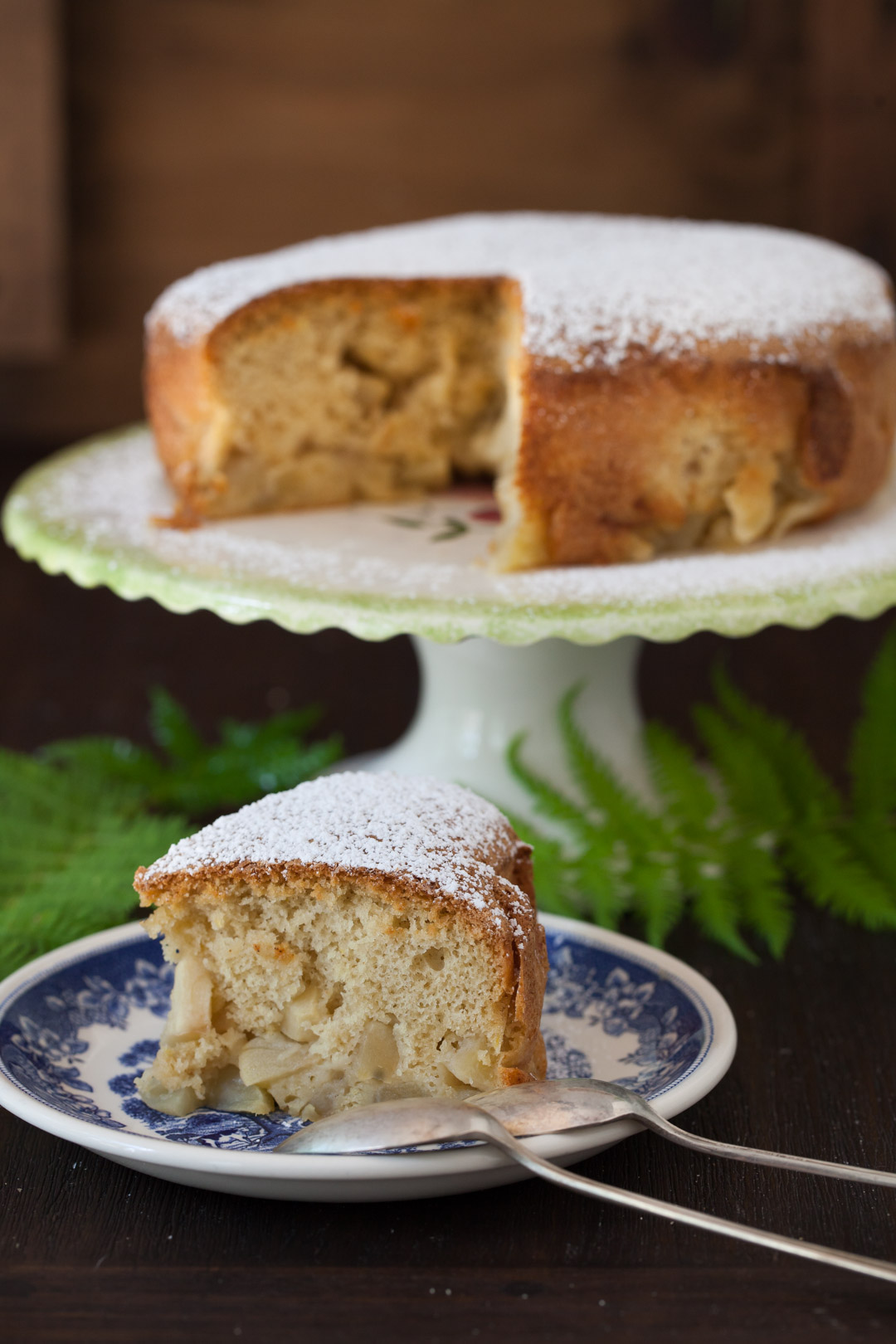 If you love apples, you're really going to enjoy this one. The recipe comes from my mother who lives in St.Petersburg. The cake has no butter. Enjoy!

Preheat the oven to 350F. Line the bottom of a 9-inch springform pan with parchment paper. Butter the paper and the sides of the pan.

In a medium bowl mix together apple chunks, lemon zest, and lemon juice. Set aside.

Meanwhile, in a large bowl, using an electric mixer or whisk, beat the eggs with sugar until thick and ribbons form on the surface of the beaten eggs. Beat in vanilla, then stir in flour, baking powder, salt with a wooden spoon until just combined.

Put the apples in the prepared pan. Pour the batter evenly over apples. Shake and tap pan to distribute batter through all the apples, and then smooth out the batter on top. You should have a relatively even layer of apples and batter.

Bake for about 45 minutes or until toothpick comes out of batter cleanly and apples can be easily pierced. Allow cooling in pan on a rack for 10 minutes. Remove from pan and allow to cool bottom side down.

Serve warm or cooled, dusted with powdered sugar and cinnamon. 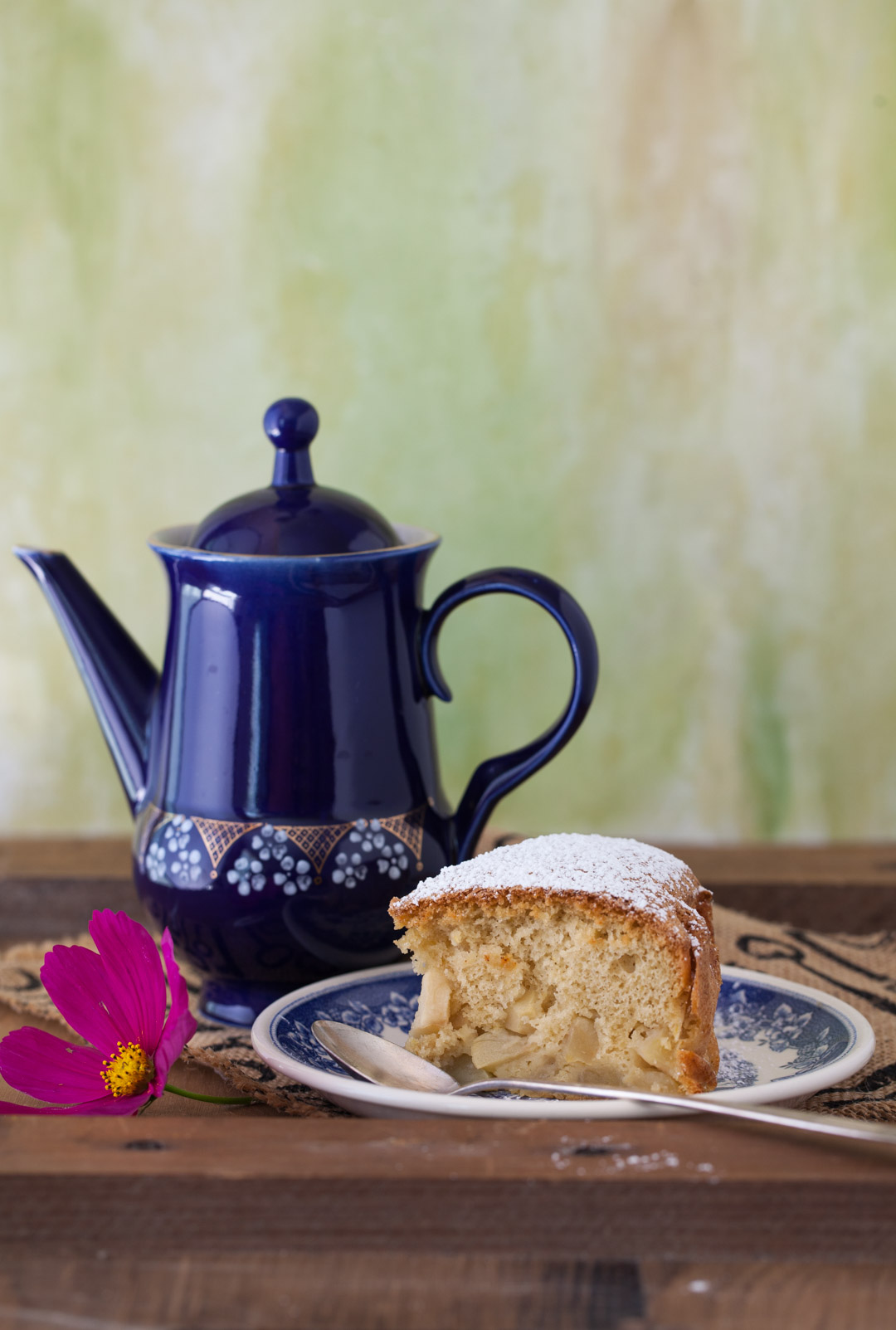 Apple cake with a teapot 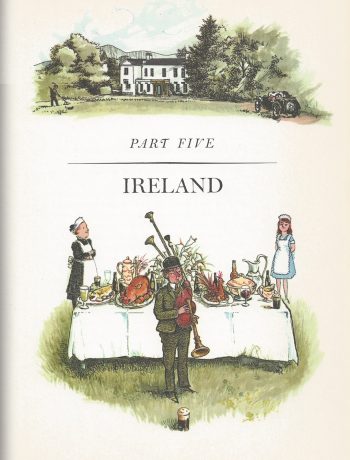 6 Recipes for St.Patrick’s Day to Try 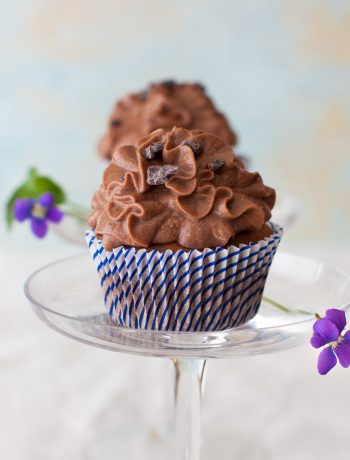 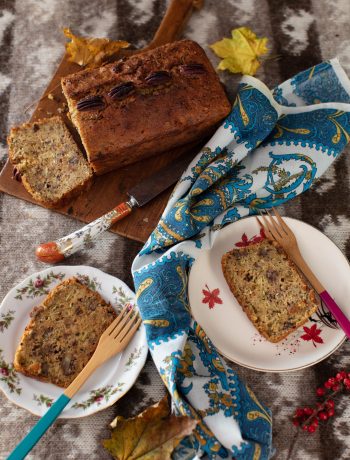