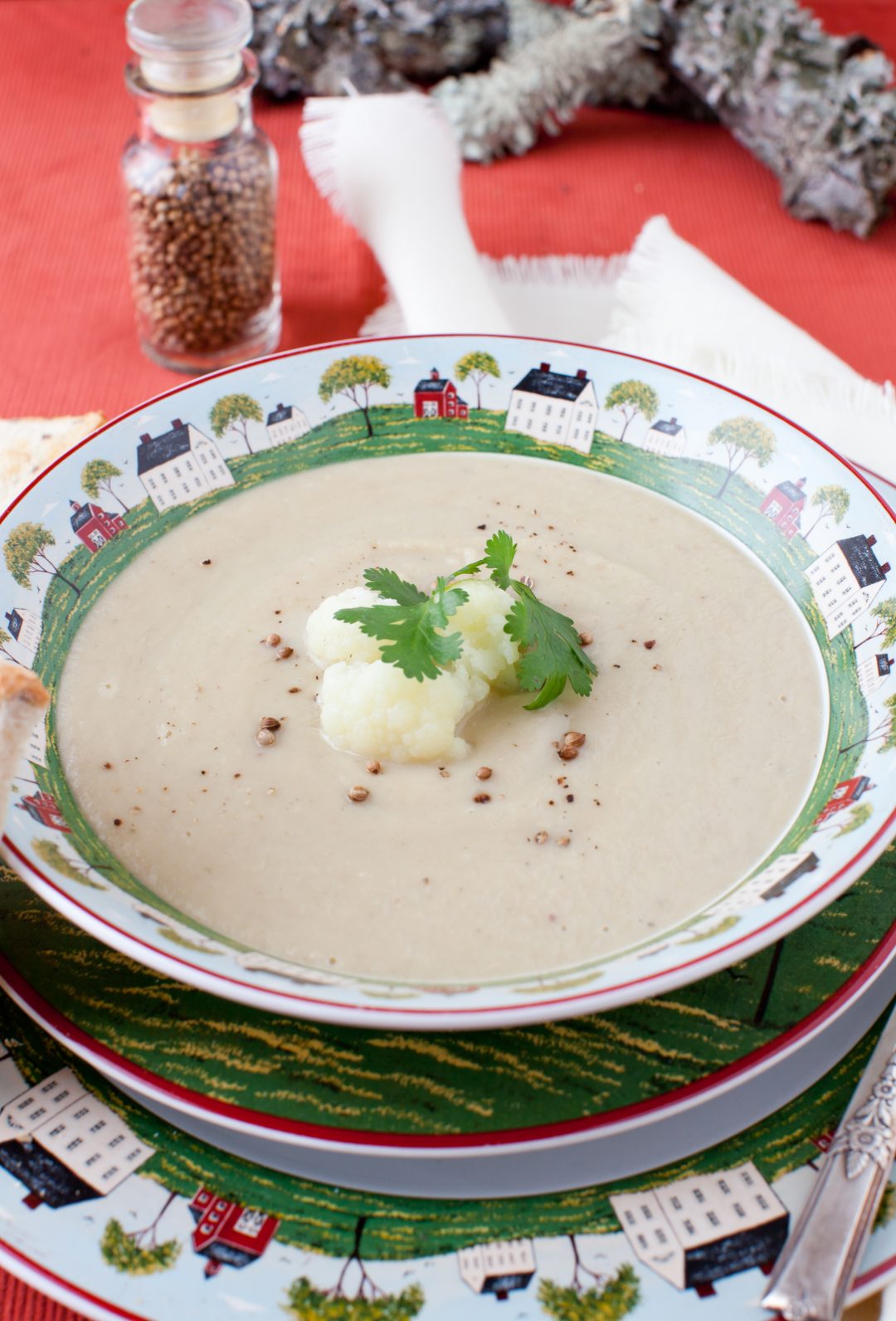 This combination of cauliflower, garbanzo beans, and coriander works well in this richly flavored winter soup. 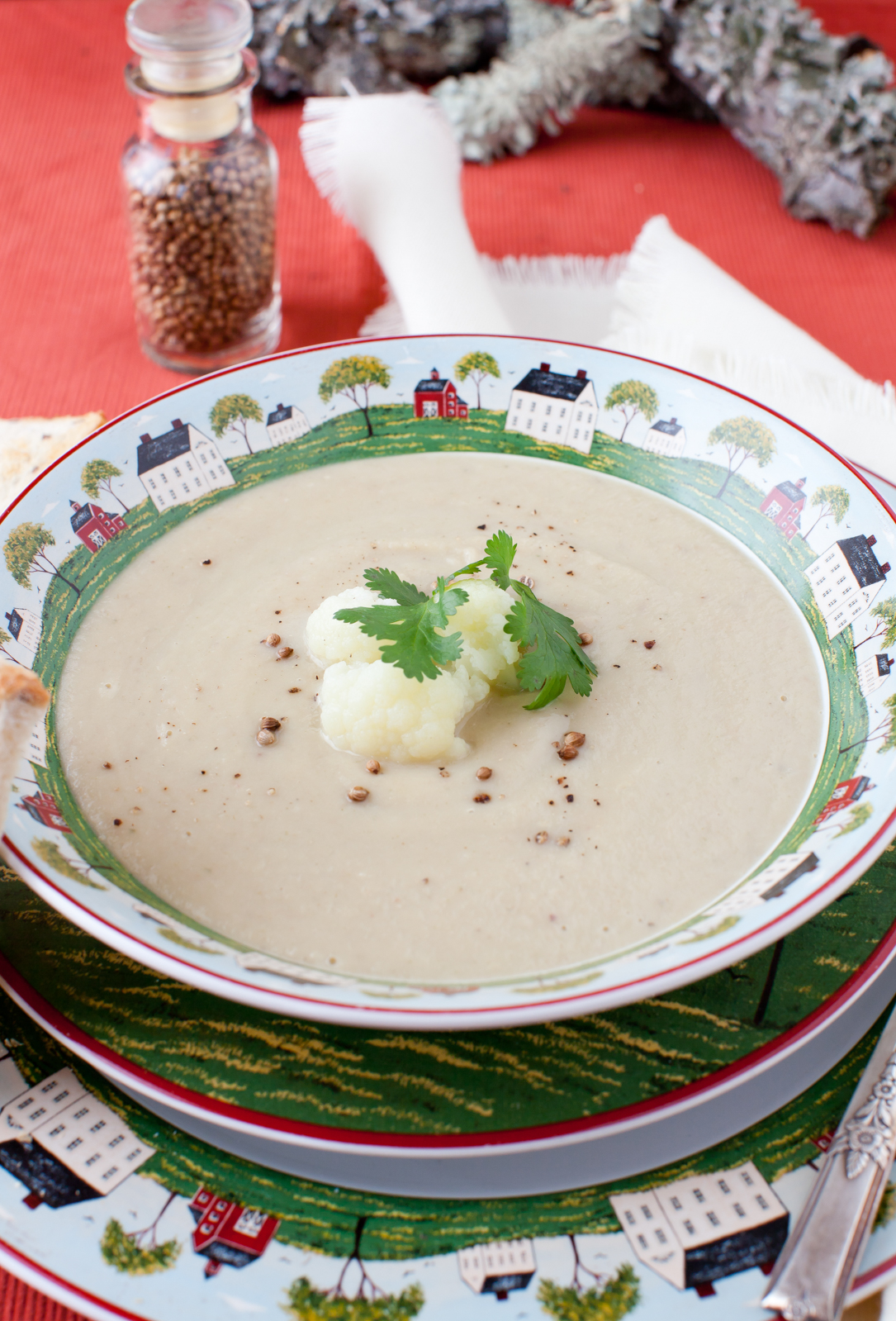 Preheat an oven to 350ºF. Place the cauliflower in a baking pan.  Drizzle 2 tablespoons of the olive oil onto the cauliflower, sprinkle with salt and pepper, and toss to coat lightly. Bake in the oven until tender, 35 minutes.

Heat the remaining 2 tablespoons olive oil in a large soup pot over medium heat.  Add the onions, garlic, and coriander and cook, stirring occasionally, until the onions are soft, 10 minutes.  Add the cauliflower, garbanzo beans, stock, and enough water just to cover the cauliflower by 1-inch. Bring to a boil and simmer 10-15 minutes. Remove from the heat and let cool.

Puree the soup in a blender until very smooth. Add the half-and-half and season with salt and pepper. If the soup is too thick, add water to correct consistency.

To serve, heat the soup and ladle into bowls. Garnish with cilantro and serve immediately.

CORIANDER For Good Boys and Girls from The Spice Cookbook 1964

“Trough your current spice shelf may not include coriander, it may soon become part of your repertory of spices. If you are devoted to frankfurters, real Indian curry, or like a nip of gin now and then, you are already acquainted – if unknowingly – with coriander seeds. For generations, coriander has been known to good boys and girls who have been rewarded with old-fashioned pink or white candies, known as “comfits.” To reach the coriander seed at the center of these comfits requires a great deal of sucking and tumbling between teeth and tongue. But once the hard sugar shell is penetrated, there is the treasured seed.
Coriander is another of that timeless meat-magic-and-medicine, good-for-man-or-beast spices whose history stems from the earliest times. With the rise of civilization the coriander plant, native to the Mediterranean, developed into a product of worldwide trade. It grew in the Hanging Gardens of Babylon; it was among the medicinal plants mentioned in the Medical Papyrus of Thebes – written in 1552 b.c. – and it was placed in Egyptian tombs some 3000 years ago.
All Sunday-school students will recall that the Children of Israel, on their long trek to the Promised Land, were nourished by the manna,…” which was as coriander seed…And the people went about, and gathered it, and ground it in mills, or beat it in a mortar, and baked it in pans and made cakes of it, and the taste of it was as the taste of fresh oil.”
Coriander is a small seed, ranging in color from white to yellowish-brown. The seeds are almost round, having alternating straight and curving ridges, and vary in size from 1/8 to 3/16 of an inch in diameter. Coriander has a pleasing aromatic taste, suggesting to some a combination of lemon peel and sage, and to others a mixture of caraway and cumin.”

January 3, 2012 By Yelena Strokin
4
The Noncollapsible Cheese Souffle with Mushrooms and Wasabi A Glimpse at Recipes of The Past: Gateau Grand Marnier - Orange Liqueur Cake 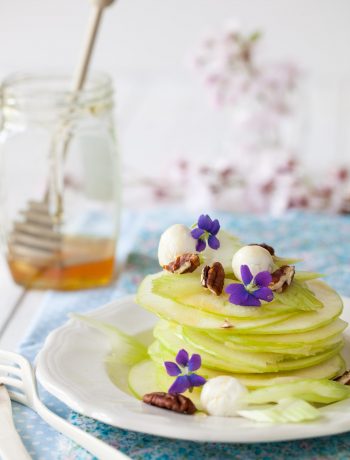 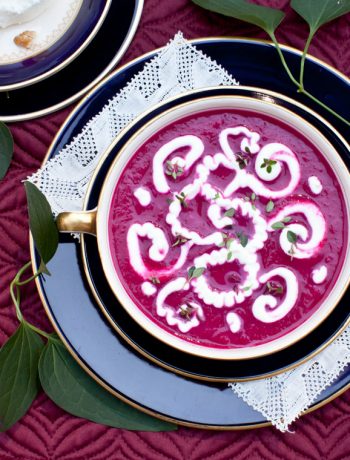 Cream of Roasted Beet Soup with Pears and Ginger 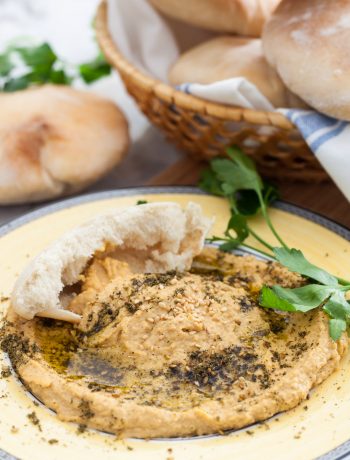 Homemade Hummus Made with Dried Chickpeas