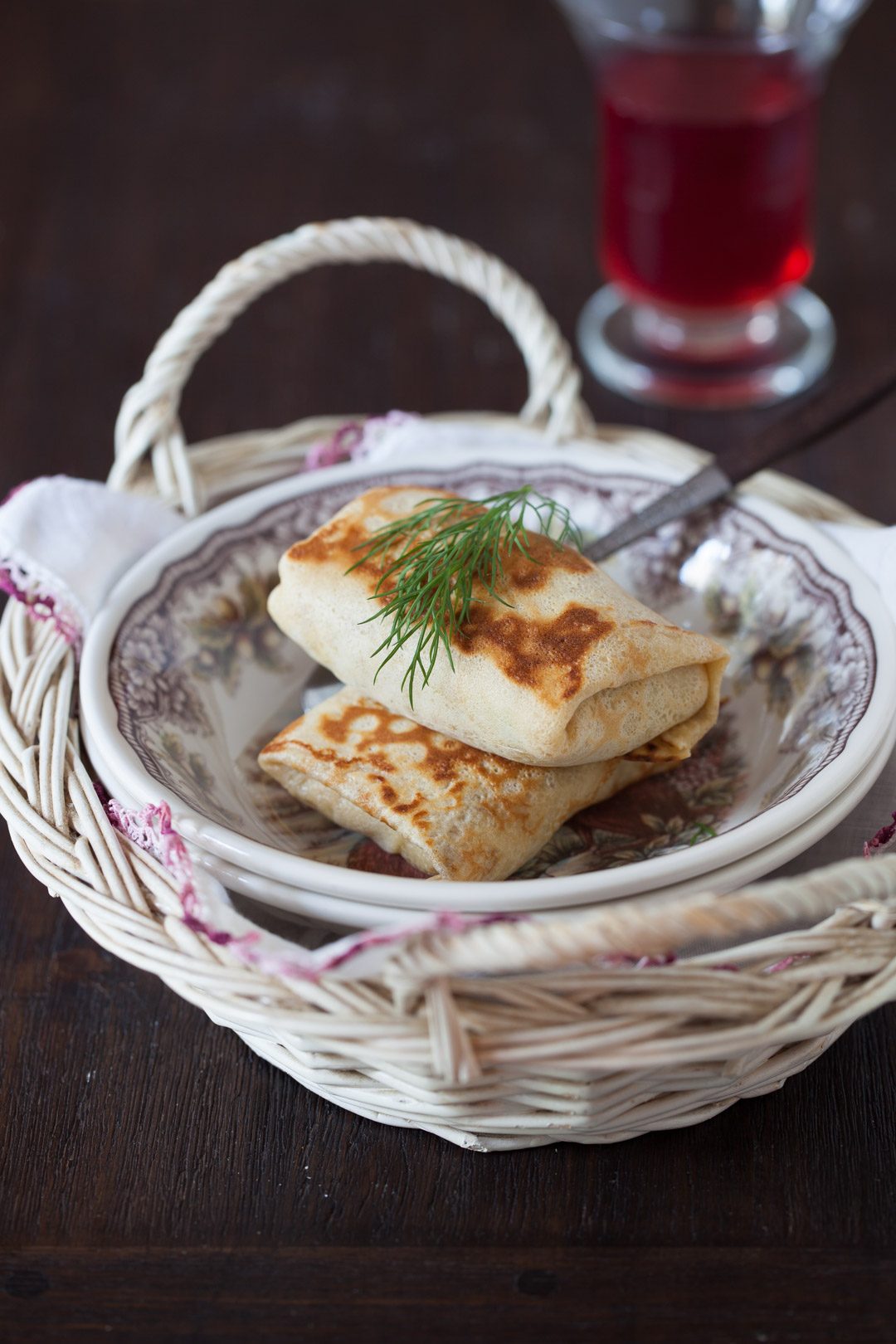 A blin, blintchik or blintz is a type of thin pancake.

Pancakes are considered one of the most popular dishes in Russian cuisine. The story of their origin is shrouded in mystery. Some historians claim that yeast pancakes appeared in Russia at the very beginning of the 11th century (years of 1005-1006). In according to one of the versions first pancake came out as a result of overheated oatmeal pudding, which turned flat and browned. According to another version by historian Prof. Pokhlebkin, pancakes have appeared much earlier, even before the 9th century. The Russian word for pancake, “blyn” seems to be corrupted version of “mlyn” – an archaic word meaning “to grind” or “to mill” in Russian, as well as in a number of other Slavic languages. Until Christening of Russia by King Vladimir in 988, pancakes were used as sacrificial bread during pagan rituals. Often those rituals were very cruel and violent when not only animals but sometimes people too were slaughtered as offering to the gods.

Starting from 19th-century pancakes take a prominent place at the centerpiece of Mardi Gras (or “Maslenitsa” in Russian), end of winter carnival also taking roots in ancient pagan rituals. Round pancake represented sun acquiring strength after long winter months. During festival, pancakes were usually consumed with honey and butter. Surprisingly, pagan in its origin “Maslenitsa” carnival has lived through almost ten centuries side by side with Eastern Orthodox Christian tradition.

Each family had its own pancakes recipe passed on from generation to generation. Usually, during “Maslenitsa” carnival people eat pancakes in the morning and in the evening, streets are full with stands selling sweet yeast pancakes and restaurants serve pancakes with mushrooms, herring, caviar, sour cream, honey and fruit jams. During times of Imperial Russia, pancakes were often baked with addition of millet, semolina or buckwheat and used to wrap meat filling into them.

Do you know that in according to tradition pancakes are not supposed to be cut with a knife or even poked with a fork? Since pancake impersonates sun, to cut it with a knife would mean to purposefully harm it and delay spring. For such transgression in medieval times, one could have been easily beaten up. Pancakes were supposed to be eaten only by hand – they can be rolled, ripped in pieces but without the use of any utensils.

In countries around the world typical pancakes ingredients are pretty much the same, however, the methods of cooking are quite diverse. For example, in England malt flour and ale are added to the pancakes batter. In America, pancakes are usually much thicker than in Russia and they are served with maple syrup. Cheese, raisins and even bacon are common add-ons. In Germany, pancakes could be either thin and crisp or thick. They are served with sugar and lemon. In Spain and Latin, America pancakes are usually corn-flour based and used as a wrapper for minced meat and cooked vegetables. In China dough for pancakes is usually stiff with onions and scallions used as add-ons.

Over the centuries pancakes have spread around the world and are loved by people everywhere. But only in Russian cuisine literally, hundreds of recipes exist for such seemingly simple dish. 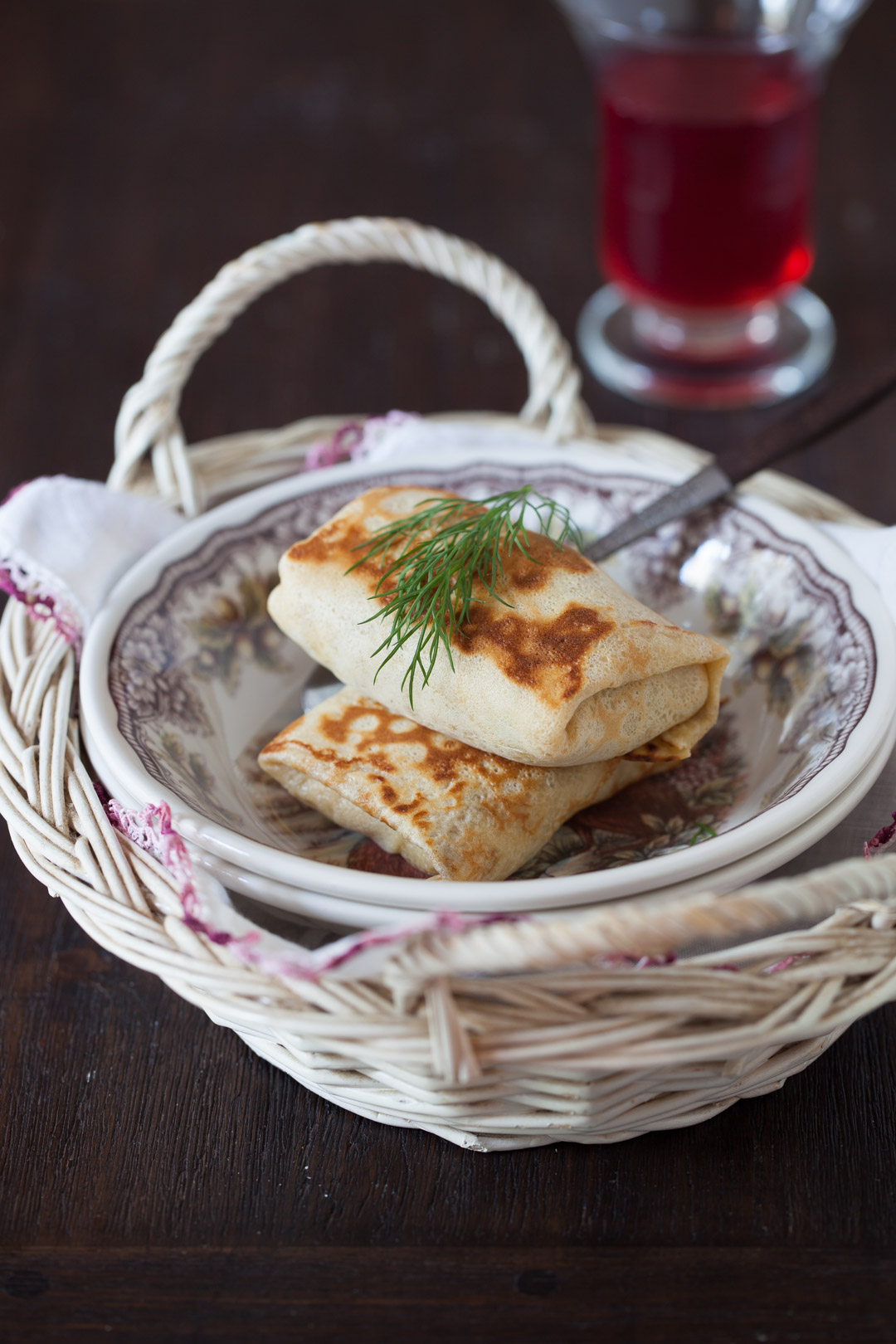 To make the batter for the blintzes: Put the flour, sugar, and salt in a bowl. Add the eggs, mix well with a whisk, then stir in half of the milk to make a smooth batter. Gradually stir in the rest of the milk and the water. Let the batter rest in a warm place for about an hour. When you are ready to cook the blintzes, give the batter a stir and add the melted butter. Brush a pan with a little oil and heat. Ladle in a little batter and tilt the pan to cover the bottom thinly. Cook the blintz for about 1 minute. As soon as little holes appear all over the surface, turn the blintz over and cook the other side for 30 to 40 seconds. Transfer to a plate and cook the rest of the batter.

To make the stuffing: On a frying pan with olive oil, sauté onions till golden and soft, add the cabbage, and cook, stirring constantly, till cabbage is very soft and loses half of its volume. Mix in the cooked eggs and fresh dill, then salt and pepper. Let the stuffing cool a little.

Spoon a tablespoon full of cabbage mixture along with the edge of each blintz. Roll the blintz over the filling. Fold the sides in toward the middle. Fold the blintz into a flat rectangle.

Serve the blintzes with cream and some chopped parsley or dill.

If you like to reheat them, sauté the stuffed blintzes with a little butter on both sides till crispy. You can freeze them in an airtight container for up to 3 months. 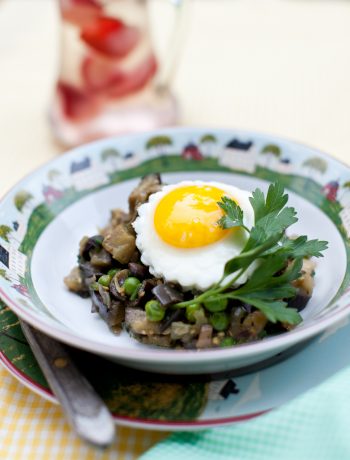 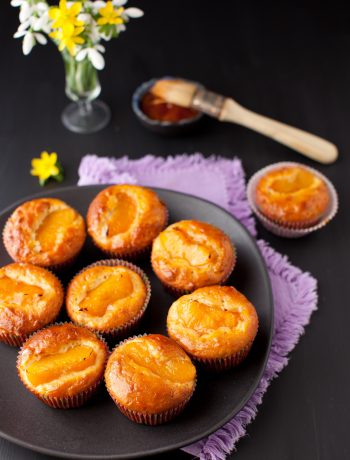 Peach, Oatmeal and Apricot Jam Cupcakes or Muffins, You decide! 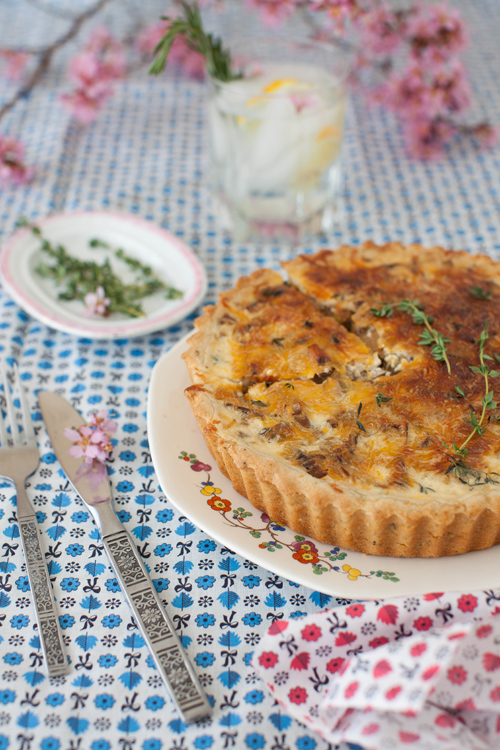