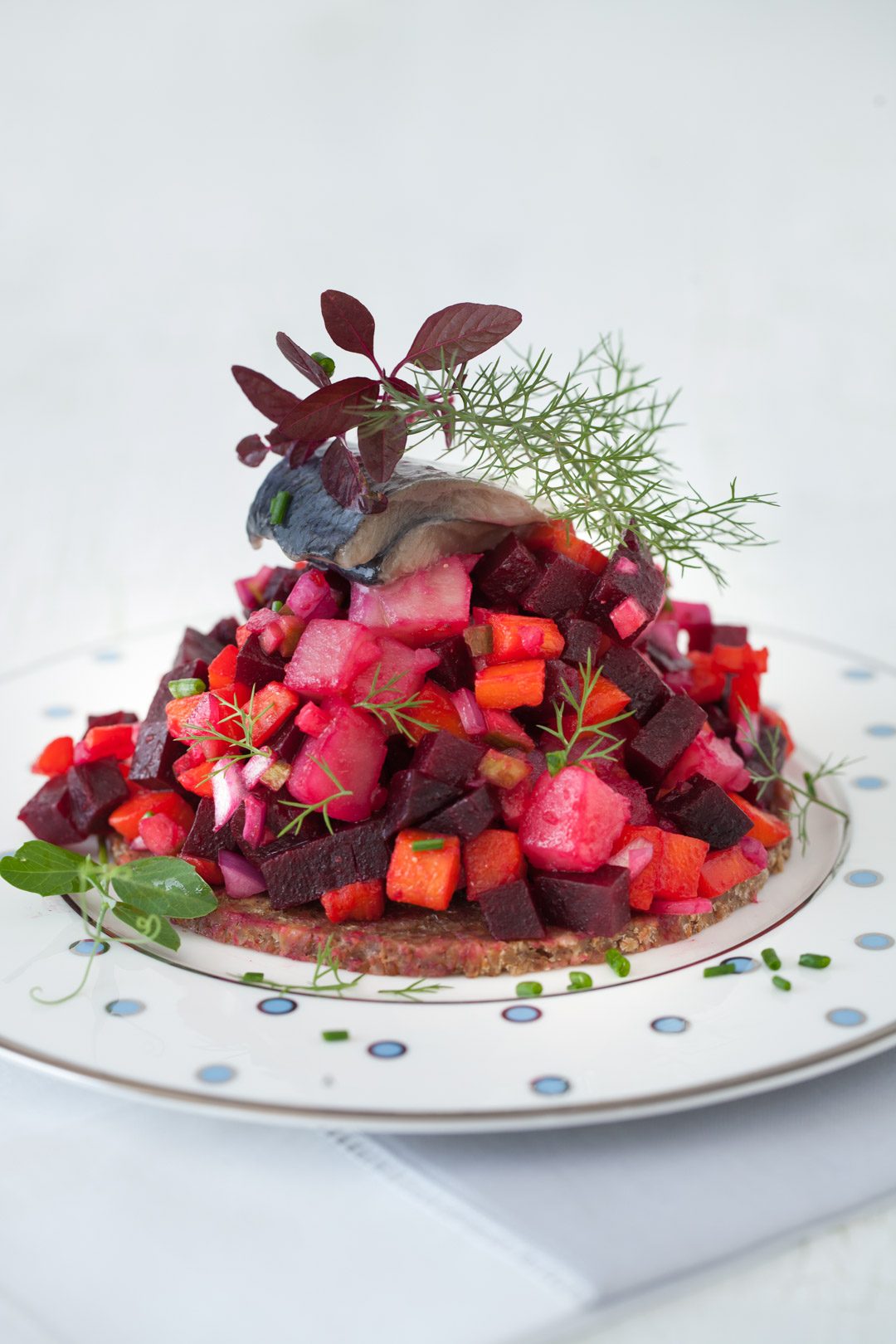 Vinegrette (pronounced as “vee-ne-gret”, from French “vinaigrette”) is widely popular in Europe as well as in tsars time Russia salad dressing made of vinegar, olive oil, and mustard. The name originates from a diminutive form of word vinegar (or in French “vinaigre”).

In modern-day Russian word “vinegrette” is used for a salad made of boiled beets, potatoes, carrots, pickles, scallions or onions as well as pickled cabbage. The salad is dressed with sunflower oil or mayo; even though in the past only mustard-based “vinaigrette” dressing was utilized and that has given the name to this dish.

Vinegrette was brought into Russian cuisine in the 19th century, most likely either from Germany or Scandinavian countries. British cookbook of 1845 for example, includes a recipe of “Swedish herring salad” made of Norwegian herring, beets, potatoes, and pickles, apple mashed with egg yolk served with a dressing made of oil, vinegar, grated egg yolks, and sour cream.

Classic Russian vinegrette is made of: beets, carrots, potatoes – boiled and cooled off, pickles and pickled cabbage, onions and/or scallions. All ingredients are taken in approximately equal proportion, even though a bit lesser (than any other used veggie) amount of onions and a bit larger amount of carrots are used. The dressing is made of very mild vinegar (3% or so), sunflower oil, salt, and black pepper. Some amount of finely cut herring soaked in milk also could be added, but in such case, more potatoes and onions are used while pickled cabbage is skipped completely.

Vinaigrette – is the second most popular salad in Russia. 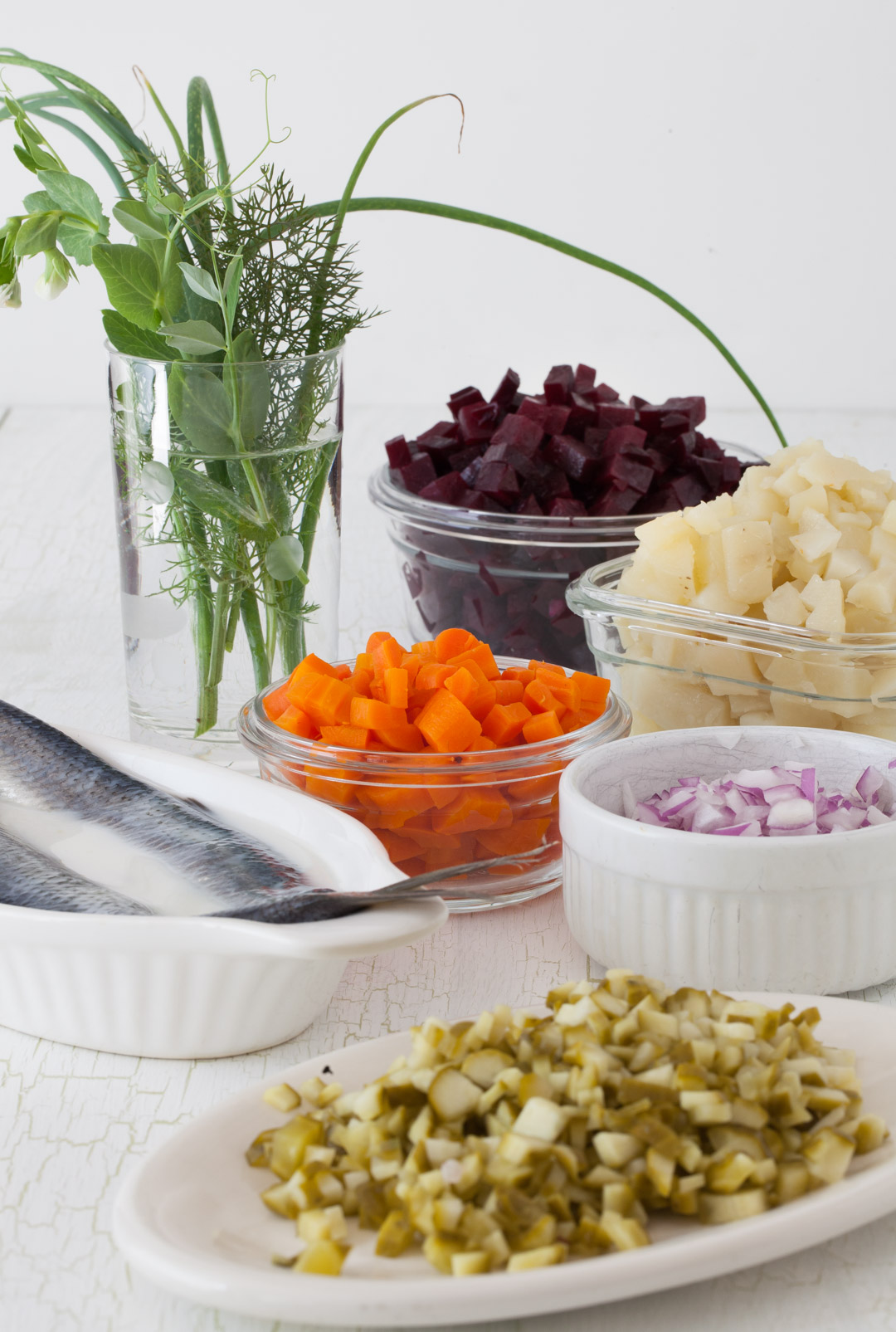 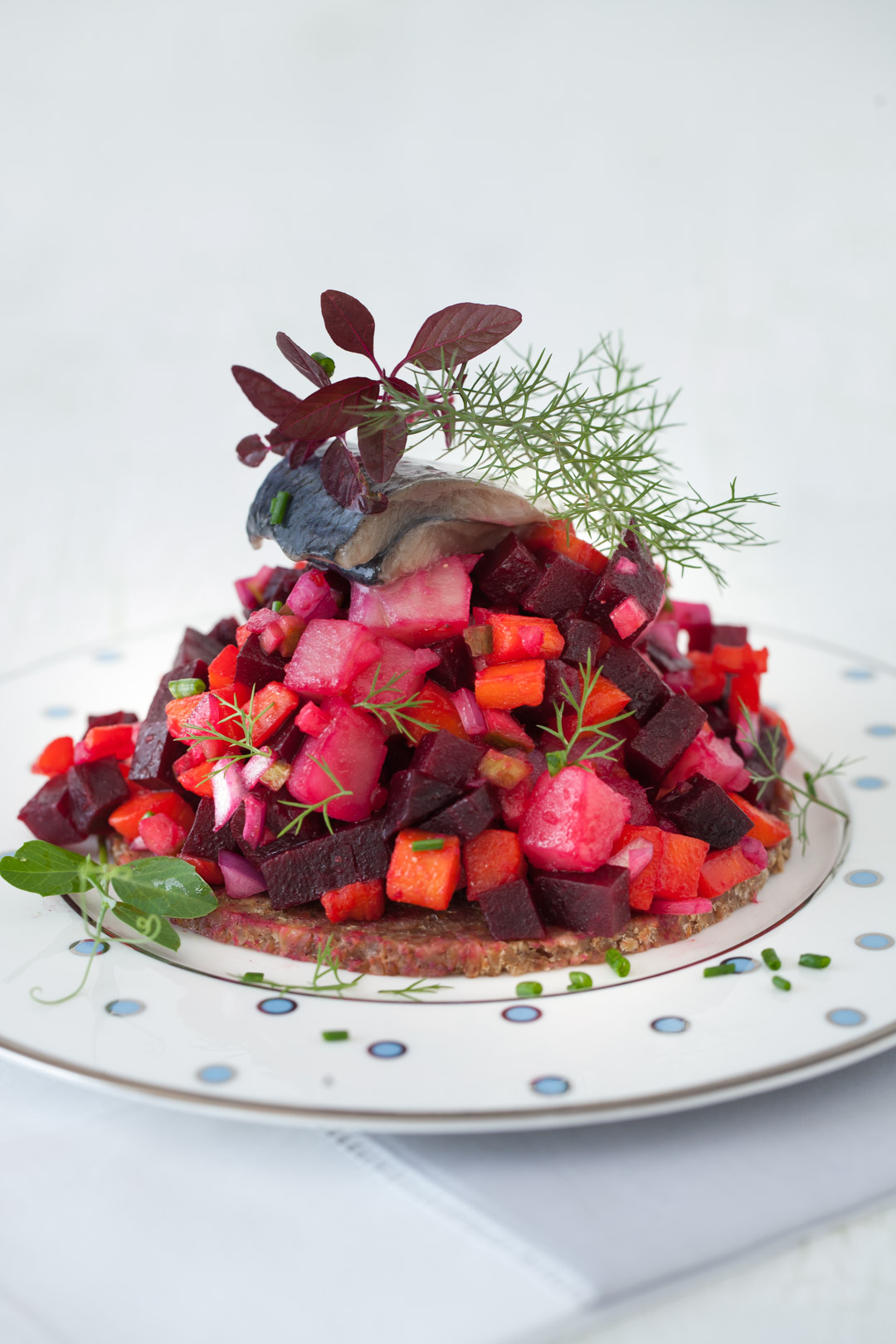 Place the unpeeled beetroot in a large saucepan, cover with water and bring to a boil.

Cook for 1 1/2 hours, or until tender when pierced with a knife. Drain, leave to cool. Peel and dice.

Cook the unpeeled potatoes and carrots in a saucepan of boiling water for 20 minutes, or until just tender. Don’t overcook the potatoes. Drain, leave to cool. Peel and dice.

In a big bowl careful mix together potatoes, carrots, beets, onions, pickles, and parsley. Add the sunflower oil and vinegar. Season with salt and pepper.

Serve on a toast of dark bread with the herring on a top, garnish with a fresh dill. 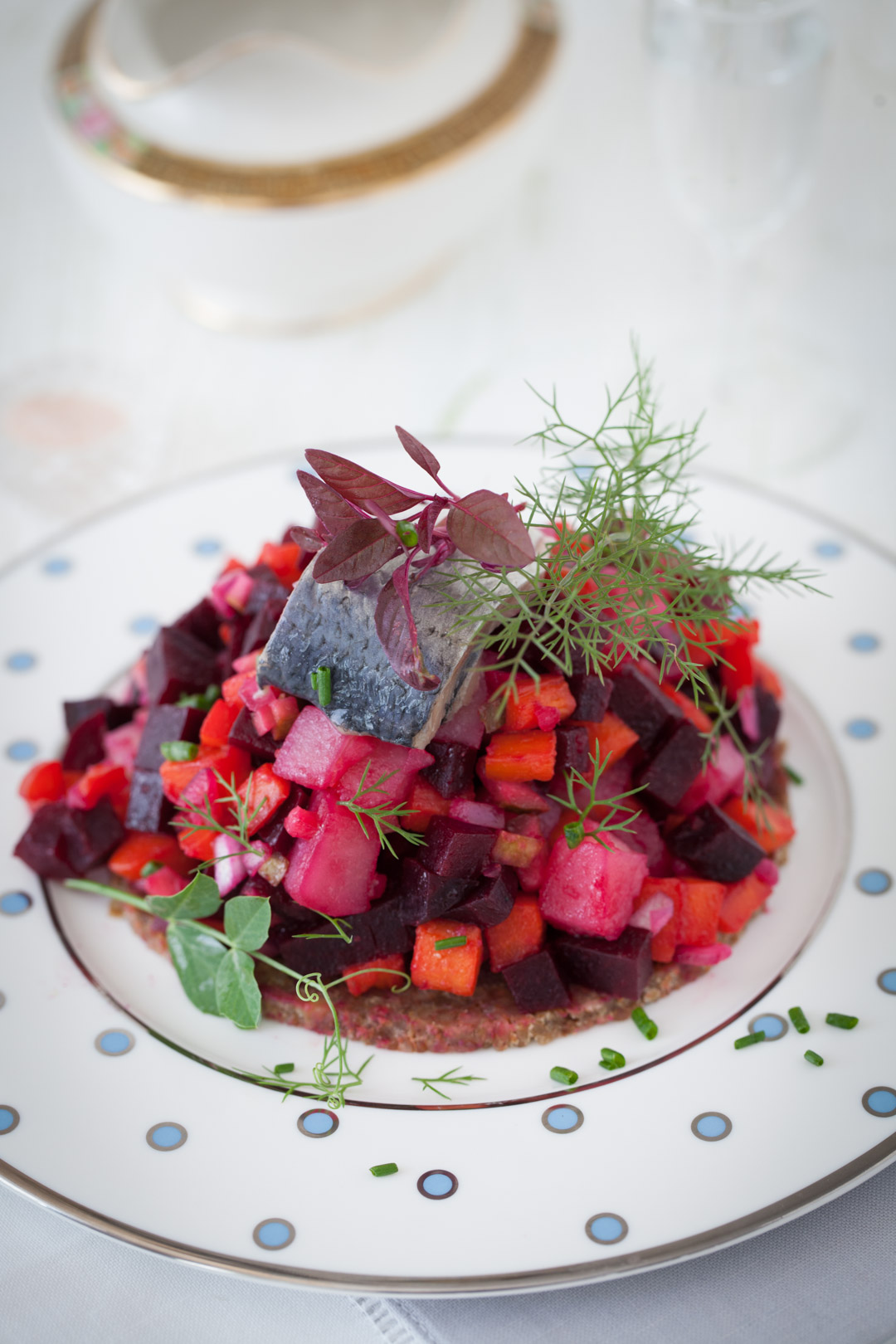 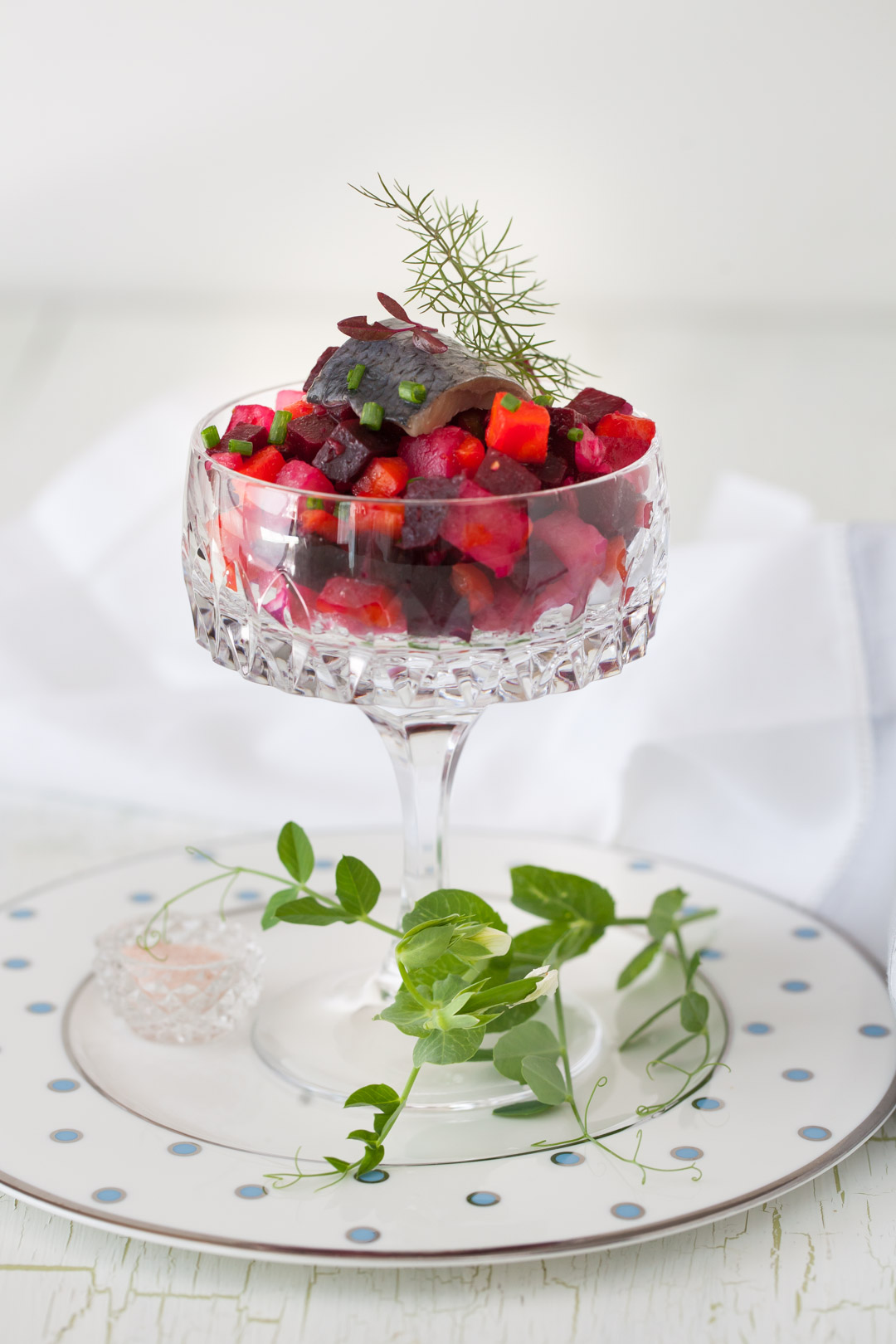 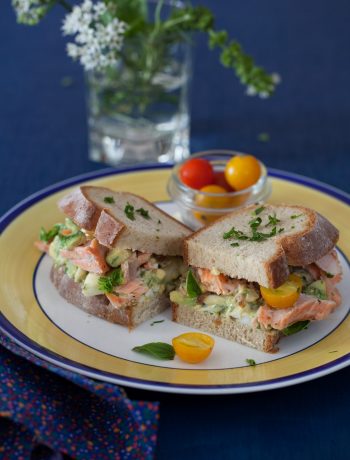 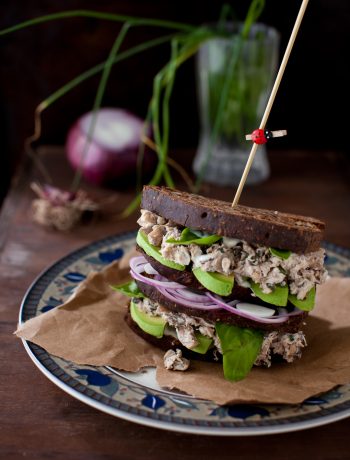 Basil Chicken Salad with Mushrooms, Walnuts, and Avocado on a Whole Grain Bread 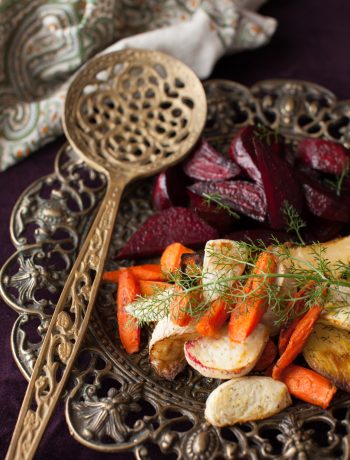